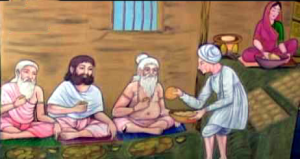 Jalaram Bapa (4th November 1799 – 23rd February 1881) was born in Virpur, Rajkot district, Gujarat, India. His father was Pradhan Thakkar and his mother was Rajbai Thakkar who belonged to Thakkar clan, which is a sub-group of the Lohana clan. He was a devotee of the Hindu god Rama.

From the young age of twenty Jalaram Bapa was known as Bapa as a result of his unflinching faith, devotion and dedication towards Lord Rama. This devotion manifested through his selfless service appropriately named Sadavrat. Bapa started “Sadavrat” – feeding the poor and providing grains and grocery to the needy, whether Hindu or Muslim, the two main religions then co-existing in India. Indeed, he fed all people regardless of their faith, status, caste or creed.

Sadavrat has unabatedly been going on for over 200 years, and since 9th February 2000 Virpur Temple has stopped accepting donations in any form or shape for this sewa.

Bapa treated all pilgrims, sadhus and saints with utmost compassion, love and earnestly served them all with complete and total faith in Lord Ram. To a normal being they were simply pilgrims, sadhus and saints; however for Bapa, he was serving Lord Rama. To Bapa every soul is a part of Lord Rama. In essence that approach, reflected the belief that we all originate from the same source and will merge into it, at an appropriate time.

Virbaima, who Bapa espoused at an early age of 16 years, was a pillar, true propeller and tower of strength in these noble deeds, and in building up the “Sadavrat”. During the embryonic stage of Sadavrat, Pujya Bapa and Virbaima used to work in fields, engaging in hard labour under the scorching heat of the sun to provide food and grains to sadhus, saints, pilgrims and other passers-by.

Their earnings were in form of a sack, or a bag, of grain which they would use most judiciously for personal consumption, saving a major portion for Sadavrat. Bapa encountered various precarious situations testing his faith to the ultimate level wherein food supplies would run low, virtually no income would flow and lenders would knock on the door. Eventually, Pujya Bapa reached a stage, where at Virbaima’s insistence, Bapa had to sell Virbaima’s ornaments and jewellery in order to carry on the noble task of service to humanity – Sadavrat. Sadavrat thus continued.

Had it not been for Virbaima’s divine devotion, dedication and utmost sense of duty to serve her husband, Bapa would not have reached the stage of God realisation. She prepared food parcels and prasad not just for guests but also for those passing by, onwards in their journeys – and the food, never, in the end, running out – which in itself was a miracle. As a result, notwithstanding the scarcity of food and water in the 18th Century, surmounting seemingly next to impossible situations, mustering and manifesting total devotion, dedication and determination together with blessings of Lord Rama and Guru Bhojalram, Pujya Bapa’s endeavours led to miracles. The supply of food, for example in Virpur alone, to this very day remains inexhaustible as there is an unending supply of food and other necessities at Pujya Bapa’s place.

Selfless service and the fruits of Guru’s blessings

Bapa’s Guru Bhojalram had blessed that Bapa will remain immortal through his selfless service and Sadavrat. As this kaliyug progresses, just by invoking his name, with faith, miracles will happen.